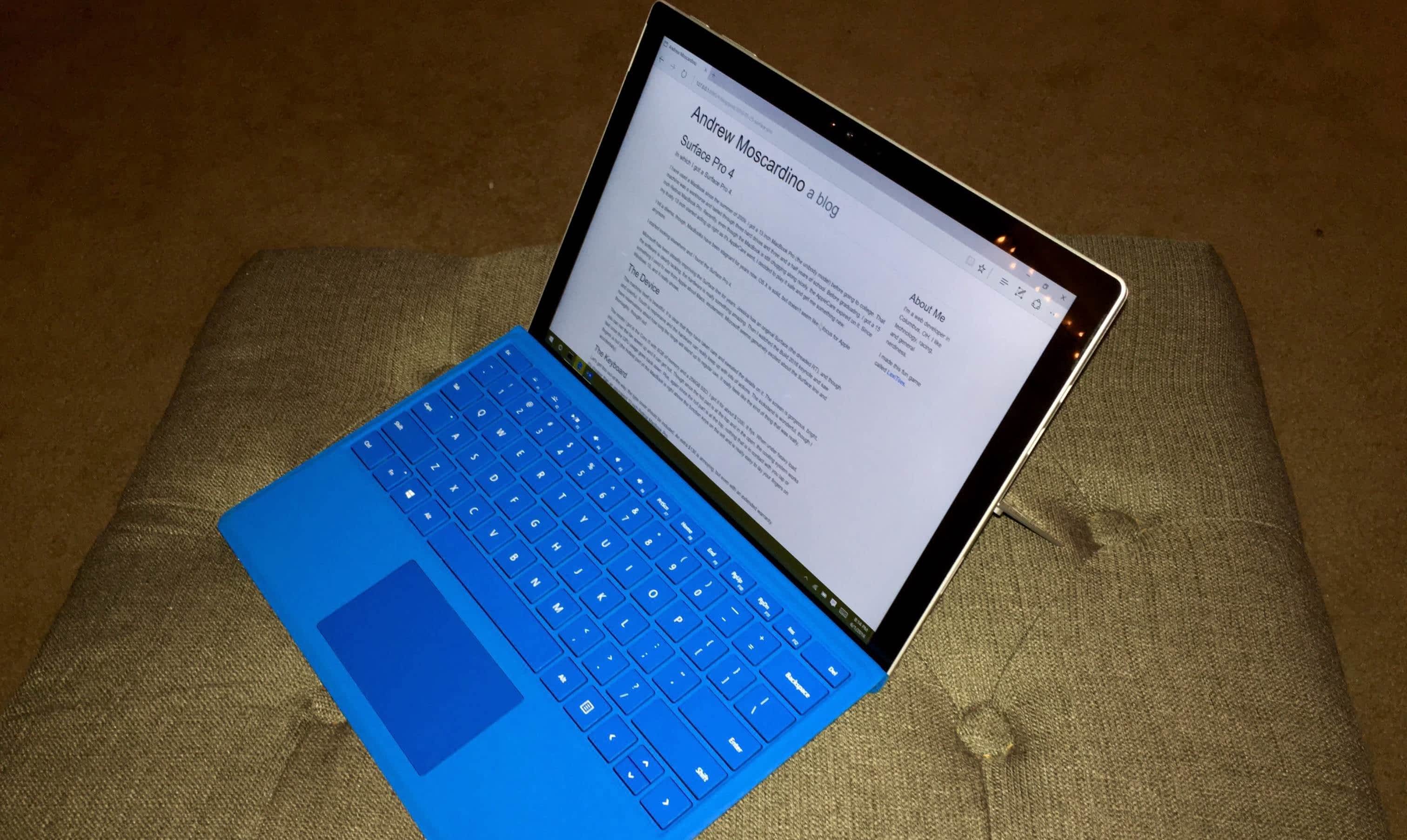 In which I got a Surface Pro 4.

I have used a MacBook since the summer of 2009. I got a 13 inch MacBook Pro (the unibody model) before going to college. That machine was a workhorse and lasted through three hard drives and three and a half years of school. Before graduating, I got a 15 inch Retina MacBook Pro. Recently, even though the MacBook is still chugging along nicely, the AppleCare expired on it. Since my trusty 13 inch started acting up right as it’s AppleCare went, I decided to play it safe and get me something new.

I hit a dilemma, though. MacBooks have been stagnant for years now. OS X is solid, but doesn’t seem like a focus for Apple anymore.

I started looking elsewhere and I found the Surface Pro 4.

Microsoft has been steadily improving the Surface line for years. Jessica has an original Surface (the dreaded RT), and though the software is clearly lacking, the hardware is really something amazing. Then I watched the Build 2016 keynote and saw something I used to see from Apple about Macs: excitement. Microsoft seems genuinely excited about the Surface line and Windows 10, and it really shows.

The machine itself is beautiful. It is clear that they have taken care and sweated the details on it. The screen is gorgeous, bright, and colorful. Touch is responsive and the hardware can really keep up with lots of actions. The kickstand is wonderful, though I have reservations about how long the hinge will stand up to regular use. It really feels like the kind of thing that was really, thoroughly, thought out.

The model I got is the Core i5 with 8GB of memory and a 256GB SSD. I got it for about $1200. It flies. When under heavy load, you can her the fan speed up and it can get hot. Though since the hot part is at the top and in the open, the cooling system works fast once the CPU usage goes back down. Plus, again since the hot part is at the top, nothing that is in contact with you lap or fingers is hot (the hottest part of the MacBook is right above the function keys on the left and is really easy to lay your fingers on accidentally).

Let’s get this out-of-the-way: the type cover should be included. An extra $130 is annoying, but even with an extended warranty, it’s cheaper than an equivalent 13 inch Retinal MacBook Pro.

But the type cover is nice. It’s not MacBook keyboard (the gold standard), but it is hundreds of times better than any keyboard on any other non-Apple laptop. The keys have good travel, are well spaced, and react how you would expect. I’m still not quite used to the layout (it seems to be shifted a bit more to the left than the MacBook), but it is a nice keyboard.

It is also a necessity. As I said, it should be included.

I thought the pen was silly when I first read about it. I thought it was cool when I tried it, but I didn’t really expect it to be useful. Unlike the keyboard, the pen is included. And it is very clear why: the Surface is a pen-focused device. Microsoft is working very hard to integrate pen features into everything.

The pen is incredibly accurate and fast. It is really possible to just write on the thing.

It’s also very nice to use just to navigate the Windows UI. Unfortunately, despite a lot of effort from Microsoft, some of the Windows UI still requires a mouse. The pen, though, can do hover. It’s hard to describe, but the Surface can tell when the pen is about to touch the screen but isn’t actually in contact with it. Combine that with the amazing precision and you have a nice middle-ground between mouse and touch.

Plus, Microsoft made a great Sudoku game that uses the pen. It’s really natural to use.

Storing the pen is a bit awkward, though. It sticks to the side of the Surface using magnets, but it tends to fall off in a bag.

It isn’t amazing. It’s hard to say what the battery life is, since it varies wildly depending on use. If I stick light use, it should last for 8-9 hours. Heavy use brings it down under 3. The i5 is powerful and efficient, but heavy use is heavy use. And Edge could really use an ad-blocker.

I’ve never really been a Windows person. Windows has always been a bit off. Not everything seems like it ever fully fit. Some settings dialogs look like they belong back in Windows 95, some are very modern looking. Apple took a great approach when they basically nuked classic Mac OS in favor of OS X (weird emulation things aside). Microsoft seems like they want to do this, but isn’t ready to fully commit.

Most of Windows 10 is wonderful, modern, fluid, and just plain pleasant to use. There are warts, of course, but it really is great and suits the Surface very nicely. In most cases, it can really be used as a tablet, but then you hit various road blocks that just need a mouse (the pen greatly reduces these situations).

I’ve also hit some software-related snags. It occasionally won’t wake from sleep, though some updates seem to have lessened this issue. And it does just crash sometimes.

I’ve committed to OneNote. The Evernote importer ran well, with only a few weird formatting issues, and now I’m all in. It’s quick, easy to use, and the pen support is fantastic. Only issue are that the sync is kind of slow.