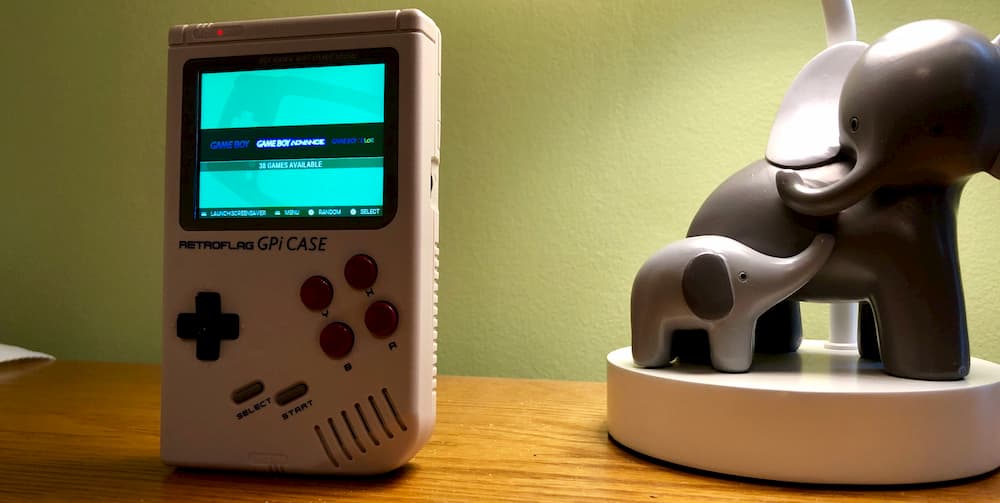 The best GameBoy ever made.

I finally got one. After months of waiting (and missing the original sale), I finally got a Retroflag GPi case.

In short, it’s amazing. The best GameBoy ever made. And it could use some work.

Technically, the GPi case is, well, a case for a Raspberry Pi Zero (or Zero W, and you will want it to be a W). But that term doesn’t really do it justice. It’s really a kit to turn a Pi Zero into a GameBoy. It includes a built-in screen, controller, and a place to put some batteries. Once you have it put together, and the SD card configured, you have a fully-functioning retro gaming handheld device.

The assembly is a bit tricky, but not too hard. It’s certainly easier than other DIY handheld kits out there since it doesn’t require soldering (or 3D-printing parts or sourcing a shell from somewhere sketchy). Everything you need is in the box (except the Pi and batteries) and you only need a screwdriver. In scope, it’s very similar to the Raspiboy and less like a Freeplay. Also, the only part that needs assembly is the cartridge, which is where the Pi lives, which makes the whole process even easier.

I do love that the cartridge is removable. It adds a nice touch to a kit that is clearly made with a lot of love and attention, but I would actually prefer if the Pi was fully inside the case (like the Raspiboy), as it seems less likely to break in the long term. My cartridge, for instance, doesn’t sit fully flush with the back of the case. It’s not a big problem, but one that makes it seem less well-built than it really is.

Aside from the cartridge issues, the rest of the case is pretty great. The buttons feel nice, though the rear shoulder buttons are a bit hard to use with my hands. The screen is a 2.8 inch, 320x240 IPS display. It’s really nice and is only let down by a lack of scaling in parts RetroPie. Some emulators also don’t scale very well to the small resolution and some games can look blurry in places.

I’ve started to notice some faint lines on the left side of the screen. Not sure what these are, but they aren’t noticeable all the time. According to a Reddit thread, it’s either an issue with the cartridge connection or a manufacturing problem. I’m guessing the latter.

My biggest problem with the case is the battery, or really the lack of a built-in battery. While true to the original GameBoy, using AA batteries is really inconvenient. The built-in safe shutdown switch is nice, though requires a little extra set up, but having no indication of how full the batteries are and not being able to charge it just makes me nervous. I’ve picked up some rechargeable batteries from Ikea so I don’t need to worry about wasting lots of batteries, but I’d still prefer something I can keep topped up easier.

There is a power cord included, but it does have the ability to charge the batteries. It can only power the device. It’s also a weird barrel connector and really short. Not exactly useful.

Being powered by a Raspberry Pi Zero has its advantages. It can run RetroPie, which makes browsing and switching games really easy. But being a Zero, it’s nowhere near as powerful as the RetroPie box attached to my TV (which is using a Pi 3). This means the boot time is a bit slow and limits what games can be played. NES and earlier work fine, as do GameBoy and GameBoy Color. SNES and Genesis games mostly work, though games that use the SNES Super FX chip are out. I’ve seen posts on Reddit about how GameBoy Advance games can experience slowdowns, but have yet to run into any issues as it depends on the game.

Loading up games is a bit annoying, since you have no direct access to the Pi. I recommend using the W variant so you can connect it to WiFi and copy games and other files over the network.

The biggest issue in using it is the screen size. It get that it’s supposed to be a small system, but some games just are not made to be played on a tiny screen. A good general rule is that if the game was made for a handheld (any of the GameBoys) then it will be fine to play. NES games also work fine for the most part. SNES/Genesis games are playable, but text can get really small (and kind of blurry due to issues with resolution scaling).

This is the greatest GameBoy ever made. It’s not perfect, and could use some design changes, but it’s very portable and can be loaded up with tons of games. For $70 (plus the Pi Zero, W recommended, Micro SD card, and some batteries), it’s an amazing deal.